I had the honor of photographing pro surfer, icon, and North Shore legend Buttons Kaluhiokalani at his home break in Oahu, Hawaii. Upon first meeting Mr. Kaluhiokalani he was washing sand off his feet and stowing away a surfboard from his morning session. It was a fitting first impression. There is a tradition in Hawaii when you visit someone’s home that you should bring a gift. Food or drink is always welcome so Jamie and I brought a chocolate haupia cream pie from Ted’s Bakery, a North Shore favorite for both locals and tourists.

My pie-hole would have to wait for that chocolate haupia cream (on our second trip back to Ted’s later that day). We sat for 30 minutes talking with Buttons in his living room and getting acquainted. I was warmly referred to over the phone and now in person as “Brotha Jay.” The entire shoot only lasted 2 hours, but he treated us like we had known him for years. How cool was that? As cool as getting to photograph a portrait of one of my favorite surfers in front of his home break. The images below are of Buttons at a spot known as “Backyards.” 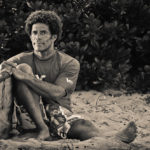 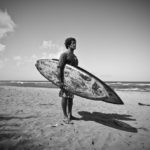 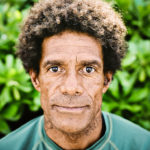 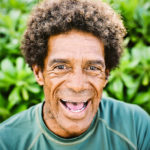 For more info on Buttons, check out his recent interview on Liquid Salt and look for the film Stylemasters directed by Greg Weaver and Sypder Wills. Filmed in the mid to late 70’s, Stylemasters is a time capsule of North Shore surfing during the evolution of the short board.  It features jaw dropping footage of Buttons. His athleticism is stunning, and his riding is from outer space! Surfer Magazine listed Buttons as one of the 50 greatest surfers of all time. Jeff Divine wrote, “There were no real top turns the way you see them today. But Buttons showed up and started spinning 360s, putting his board on an edge, breaking the fin free and trying airs. He’d busted the performance door down before the Aussies ever showed up.” At age 51, Buttons now runs a surf school, and shares the stoke once a month by taking mentally and physically challenged kids surfing with Access Surf. He has also recently started tow-in surfing for when the waves are exceptionally big. An icon, and still at it.

Interesting surf info: I asked Buttons who was the first person he saw ride switch foot and he answered “Jock Sutherland.”

Mahalo to Glen Sakamoto of Liquid Salt Magazine for helping out with the shoot.